Why are Vegans Protesting Farms and Not Exterminators? 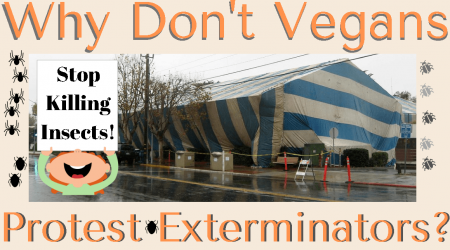 Vegans claim that they love animals, all animals everywhere. They think that all animals should have a voice and shouldn’t be hurt or injured by anyone and that’s the reason that they won’t eat animals. They are advocates for animals, right?

That’s what they’d like you to think, but the truth is not so rainbows and unicorns. The truth is that they don’t care about animals, they simply have an agenda that makes them feel smart and morally superior that they want to foist onto the rest of the population, even if they need to do it by force using the government to take away your choices.

If They Actually Loved Animals…

If they actually loved the animals, all animals, then wouldn’t saving the most number of animals be the best strategy to save the animals? After all, if you can save a million animals from certain death, wouldn’t that be better than saving 100,000? Wouldn’t all animals be equal? In fact, New Zealand declared that All Animals Are Sentient.

If all animals are sentient and important, then dogs and cats should be as important as worms and termites, shouldn’t they? But vegans don’t think all animals are equal. They put dogs, cats, sheep, pigs, goats, and chickens over, for instance, worms and termites. That’s why they don’t bother to do the math, like we did here, that Dairy Milk is 2000 Times More Ethical Than Almond Milk.

If they actually loved all animals, then why do you never see vegans protesting outside of a bait shop, an industry that sends worms to be mauled on the end of a hook and sent to certain death? Don’t worms count? In reality, to get the best ‘bang for their buck’, they would protest outside of an exterminating company. Better yet, instead of spending millions of dollars infiltrating dairies in the hopes of catching a few dirty employees abusing animals in the vain hope that people will stop drinking milk (when ironically they are Enslaving the Same Dairy Cows for their Fertilizer), they would be doing fundraisers to save a house slated for termite extermination so that the termites can live out long, happy lives eating their preferred food.

You may think this is humorous, but why should it be? If all animals are equal and worthwhile and they do not simply have an agenda to get people to stop eating meat, then to save the largest sheer numbers of animals, why don’t they seek to end the practice of termite, ant, and other insect extermination, as well as mice, moles, and other rodents?

How Many Animals Could Be Saved?

In each home that is termited, there are upwards of several million animals occupying each home. In one case, there was an estimated 70 million termites in a single home! In the US alone, there are an approximately 600,000 homes that are treated for termites every year. Assuming just 2 million termites per household, ending extermination would save over 1 BILLION animals a year!

A BILLION animals saved! And that is just termites. What about ants and cockroaches? Don’t they deserve to live too? Of course, this wouldn’t go over well with the public and vegans are not serious about saving animals, they are interested in promoting an agenda of processed foods of which they are unwitting dupes to push the profits of companies like the Impossible Burger that tests positive for the weed killer glyphosphate, making profits for the company Monsanto, that they claim to hate.

What Do They Say About This?

When confronted with this discrepancy in why they choose the agenda of forcing people to eat their miserable energy killing food and making Monsanto and Whole Foods plenty of profits over saving billions of animals a year, here’s how a vegan responded.

This is how clueless they are to reality. Tenting a house for termites is slaughter for the self-serving pleasure of retaining the value of your home and not sharing it with the insects who have decided it is their food. I mean, what world does he come from where exterminators aren’t slaughtering insects for the self-serving needs of the owners of the property? I’d say that slaughtering termites for self-serving pleasure and profit is exactly the POINT of hiring an exterminator, if you look at it objectively.

Of course, his point is a misdirection intended to say that meat eaters slaughter food animals for ‘self-serving pleasure and profit’, while claiming that vegans DON’T do that! But isn’t that the entire POINT of pesticides? If farmers didn’t exterminate the pests who were eating the plants, there would not be any profit for them, and no incentive to sell their vegan foods to clueless hipsters in New York who say ridiculous things like they don’t kill animals for profit.

I don’t know what planet vegans live on, but the last I checked, bees are bred and trucked all over the country for the sole purpose of pollinating crops like almonds, so that vegans can best replicate the dairy they obviously love so much, which causes most of the almond pulp to just get thrown out or composted. What a waste!

In fact, we actually did the math, and found that Dairy Milk is 2000 Times More Ethical Than Almond Milk! Vegans claim they don’t enslave, torture, impregnate, or murder animals for their pleasure, but if ‘providing yourself calories and nutrients’ is considered ‘pleasure’ to them, then they absolutely do, only their ethical case is worse.

Obsession with Cows is OK, but don’t discuss the insects…

And what was his response to all this? Typical vegan misdirection and abject apathy towards the billions of animal deaths caused by extermination per year. It’s quite bizarre that he espouses ‘veganism’ as a lifestyle of no harm to animals, and there are vegans who have given up civilization to hand harvest fruit in the forest in order to do the least harm, but mentioning the death of insects is ‘obsessive’! Such misdirection to avoid any real conversation is typical of vegans who can’t address rational arguments.

According to him, if someone isn’t making a profit killing the animals (hello, extermination is a $16 billion a year industry!) 1 then those animals somehow aren’t worth saving? It’s a confusing statement designed to redirect the conversation from the vegan lack of moral consistency and Move the Goalposts. Pointing out these chinks in their ideology quickly brings out comments that show their cognitive dissonance.

Another commenter thought the argument not to mass murder termites because they are animals is silly because the termites were obviously the aggressors who ‘encroached’ upon the property of a peaceful vegan (who built or bought a house in their native territory) so they can be then justifiably killed.

I guess this must be the justification they use to kill the animals on farmland. After all, the farmers are just peacefully growing crops and the insects ‘encroached’ upon their vegan food and tried to eat it! So, killing them is ‘peaceful’!

Is Food ‘Self Serving Pleasure’?

Going back to ‘Extremely Vegan’s first comment above, is the providing and obtaining food ‘self-serving pleasure’? Of course, he only means the slaughtering of ANIMALS for food is ‘self-serving’, but somehow exterminating billions of termites isn’t even worth a discussion, the hypocritical utilization of dairy cows for fertilizer isn’t worth looking into, the mass near extinction of insects isn’t worth blinking at, and slavery for pollination of almonds and an entire list of other plant foods isn’t even in their consciousness.

These people either have serious mental issues or simply don’t want to take a rational look at their own ethics. In reality, the Carnivore Diet is More Vegan Than a Vegan Diet , and on a food by food basis, Dairy is 2000 Times More Ethical Than Almond Milk because these dietary strategies do the least amount of harm to the least number of animals.

Previous Post Vegan B12 Deficiency Proves We Are Not Herbivores Next Post Eating Plants is Harmful. This is an Undisputed Fact