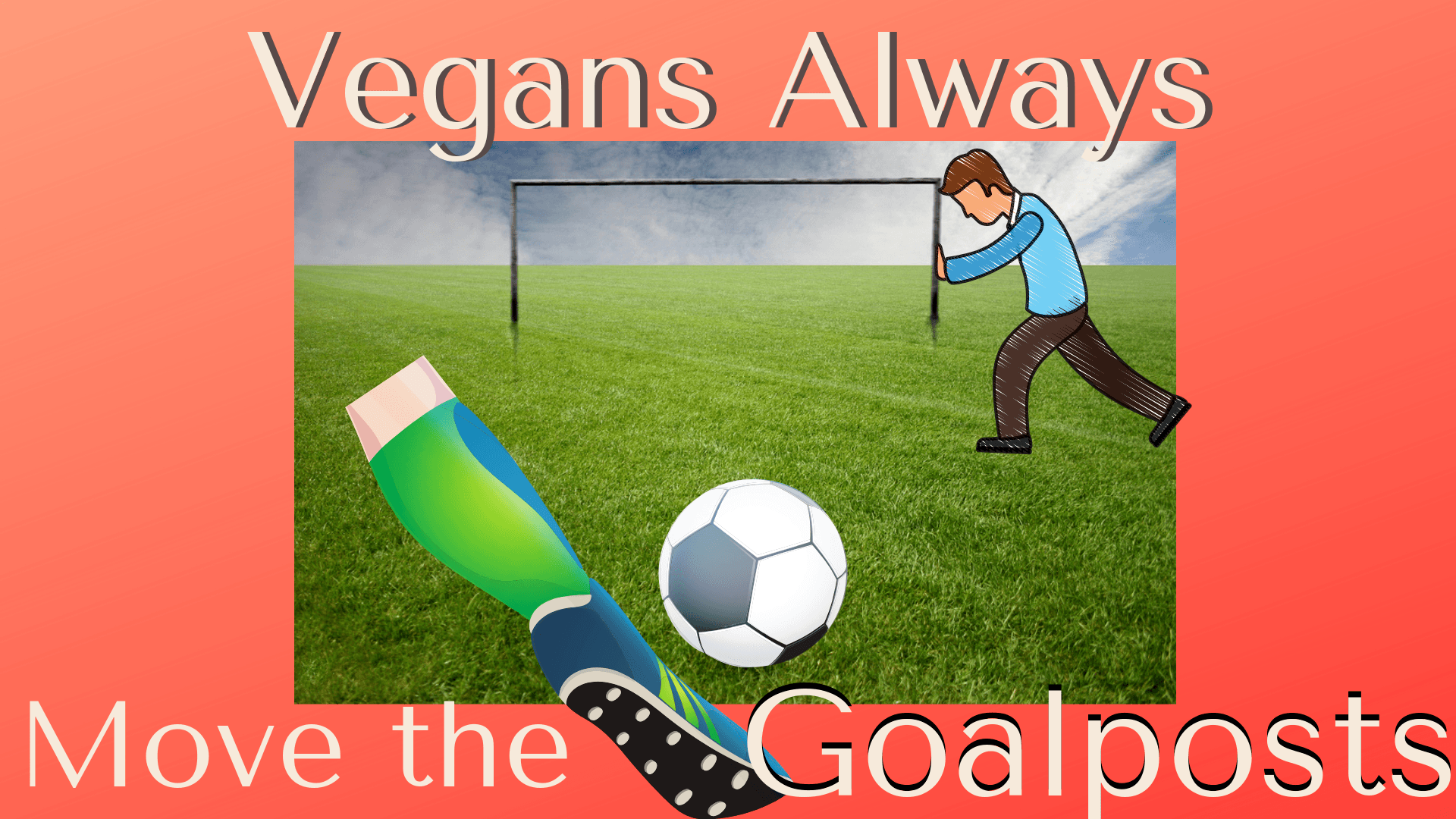 Anyone who has ever tried to have a rational debate with a vegan will certainly have noticed that whenever they are cornered, they always change the subject to another aspect of veganism and never continue the conversation along the same line of discussion. This is a debate technique known as ‘Moving the Goalposts’ and it’s done when someone is losing the debate, but can’t concede to the point they have lost because of emotional and other egoic reasons.

The Four Pillars of Veganism

In order to understand what is going on, it’s important to note the tactic they are using is based on the Four Ideological Pillars of Veganism. These pillars are:

The discussion will invariably start based on one of these pillars. For instance, like the actual convo below, a vegan will begin by saying that a vegan diet is the most ethical because it kills and exploits fewer animals. But when confronted with the reality that more animals are killed from a vegan diet, as we point out on our page Carnivore is More Vegan than a Vegan Diet, they will discontinue that line of reasoning and change the subject to one of their other ideological pillars

They will then invariably change the topic to one of the other pillars, health, sustainability, or the environment. That they are forced to change the topic is actually their admission that they have lost and cannot back up their claims with facts.

The fact is that even vegans know veganism doesn’t work. It is so unsustainable that at least 70% of people quit a vegan lifestyle, according to a comprehensive study, and most quit within a year. 1

In addition, 1/3 of vegetarians ADMIT to eating meat when they are drunk! 2 How many more eat meat and simply won’t admit to it? That long-time vegan YouTuber Rawvana, with well over 1 million subscribers, didn’t ‘come out’ as a meat-eater until she was caught eating fish, we can suspect that there a lot of other ‘closet’ meat eating vegans out there. In fact, vegan YouTubers are leaving their religion in droves. Here’s a List of Former Vegan YouTubers that is pretty extensive.

But since the population of vegans in the US is about 0.5%, that 70% number seems extremely low. Even in the non-meat eating 7th Day Adventist religious sect, less than 8% eat vegan. 3 Unfortunately, in that study, they defined vegan as someone consuming “eggs/dairy, fish, and all other meats less than 1 time/month”, meaning that someone could binge on ribeye steaks up to 10 times a year and still be considered vegan.

So it’s likely that actual vegans in that community are fewer. But maybe that’s why the ‘vegans’ in that group have been vegan for a median of 20 years, when so many begin eating animal products again, because they could ‘cheat’ and have a meat meal once in a while and still call themselves ‘vegan’.

The Other Ways They Move the Bar

There’s two other ways vegans like to move the bar. When you discuss a problem with the destruction of animals inherent in growing plants, like we discuss on the page The Carnivore Diet is More Vegan than a Vegan Diet, then they will say that ‘they’ don’t personally eat whatever the way that is offensive, and will ignore the rest of the argument. Whenever the argument is ‘general’ to veganism or plants, they will change it to a ‘personal’ argument, and vice versa.

Another obfuscation tactic is for them to say that ‘everyone else’ eats plants too, and therefore the (pollution or animal deaths) has nothing to do with veganism, even though it’s directly related to eating plants vs animals. And they will continue on in their ignorance of the death, or environmental destruction, or the poor health of their fellow humans they are advocating for.

Remember, vegans only make up about 0.5% of the population, so it’s easy for them to disclaim that vegans have any responsibility for anything.

So, the next time that you are unfortunate enough to get into a discussion with a vegan, a good debate tactic is to look out for when they move the goalposts and bring them back again and again to the point they are trying to avoid because they know they don’t have a reasonable response.

Be sure to point out how they avoided the topic at hand and ask them why. They simply rely on you being ignorant of the topics at hand and that you will let slide their change of topic because it’s human nature to be reactionary and respond to the next topic they bring up. Don’t fall for it. Call them on it when they move the bar and change the subject.