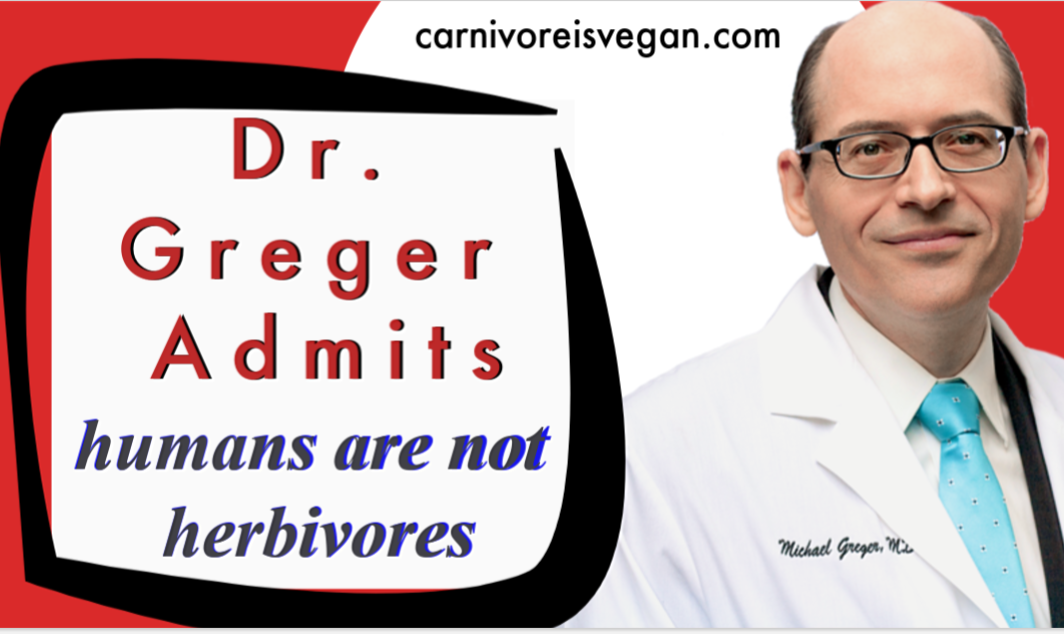 Did a vegan doctor admit humans are not herbivores? Popular vegan Dr. Michael Greger unknowingly did just that. Greger is a popular internet vegan doctor that has lots of groupies because, well, there are almost no doctors who promote a vegan diet so they have latched onto the prematurely aging emaciated man as one of their few role models.

Greger’s Argument is Based on Human Evolution… Cherry Picked

Dr. Gregor’s article entitled ‘The Diet We Were Designed to Eat’ makes the argument that we should be eating what we are physiologically designed to eat through evolution. Perhaps he should have studied these topics better since his ignorance actually admits that humans should not be eating an herbivorous diet.

He starts out by discussing the past 10,000 years where we’ve been ingesting grains. He then erroneously states that humans were eating LEAN meats for the past 200,000 years. We were actually eating FATTY meats like mammoth and reindeer, and relishing the fatty bone marrow and brains. Then he jumps to the evolutionary past where our predecessors were (presumably) eating a vegan diet.

But wait, why did he ignore the 4+ million years where human brain development went parabolic? That’s really the most interesting and important part of human evolution. Why the omission?

Well, his next statement will inform you as to why he skipped this vital step in human evolution. He quotes a study that says, “the lack of evidence supporting any notable diet-related changes in human nutrient requirements, metabolism, or digestive physiology compared to our fellow great apes” as the reason why we should be vegan.

With this reasoning, why is Greger not advocating eating leaves, unripe fruit, twigs and bark that our early hominid and prehominid ancestors were likely eating? If there haven’t been any material changes in our digestive tract, why, instead, is he advocating eating foods like beans, peas, and legumes that other primates don’t eat and that hominids couldn’t have eaten until the advent of cooking less than a million years ago?

Not only is he suggesting we should eat an evolutionary diet while recommending foods we didn’t eat during our evolution, but this is where Greger messes up and admits that humans are evolutionary meat eaters. Despite the fact he obviously thinks the quote supports veganism, it actually is stating exactly the opposite, as we shall soon see.

He attributes the quote to a paper entitled ‘Back to Basics: Why Foods of Wild Primates Have Relevance to Human Health‘ by Dr. Katharine Milton, a professor of physical anthropology, who then expounds on the quote by referring to another of her own papers entitled ‘A Hypothesis to Explain the Role of Meat Eating in Human Evolution‘ which explains that quote in greater detail… with a qualification…

How He Admitted We Are Not Herbivores

The quote that Greger erroneously uses for support of veganism is actually a QUALIFIED statement by Milton who says that yes, modern human physiology is similar as the great apes, EXCEPT FOR the “striking difference…in the size relationship of different sections of the gut.”

She then goes on to explain how this ‘striking difference” helped create us as the modern humans we are. Continuing, she then declares, “…the incorporation of animal matter into the diet played an absolutely essential role in human evolution”! (emphasis mine) 1 She goes on further to state, “Animal protein… is more efficiently digested than plant protein”. This is from the author and paper Greger is disingenuously quote mining in order to support a position the paper itself emphatically contradicts!

The other critical omission by Greger is that humans did evolve away from the great apes in a way that is not physiological, but microbiological. The great apes, and indeed all herbivores, have specialized gut bacteria that transform cellulose into short chain fatty acids (SCFA’s), also called saturated fats, that are then absorbed by the colon and used as an energy source.

Humans, because we ingested our fat calories for millions of years, evolved away from being forced to produce our own fat and can only produce, maximally, 5-10% of energy (calories) from the fermentation of cellulose,. Herbivores derive up to 70% of their caloric needs from SCFA’s, with up to 57% in the less efficient primates.

These major differences denote entirely different evolutionary processes in the apes and humans, in response to eating meat and dramatically reducing our plant intake. To fail to mention this 4 million years of evolution is disingenuous at best, intentional deception of his followers at worst.

Next, Greger outright lies when he states, “fruits and vegetables are not only good for us but are vital to our survival. Indeed, we’re one of the few species so adapted to a plant-based diet that we could actually die from not eating fruits and vegetables, from the vitamin C-deficiency disease, scurvy.”

I have to think that Greger is lying because he can’t be so ignorant as to not know about the cultures around the world that never, or virtually never, ingest fresh fruits and vegetables, such as the Inuit, Nenet, Sami, Fuegians, and the Masai. While it could be argued that the other cultures mentioned occasionally get fresh plant foods seasonally, adult male Masai eschews plant foods completely. 2 3 and yet never develops scurvy. 4

Additionally, in the 1920’s, an Arctic explorer named Vilhjalmur Stefansson came back from the arctic exclaiming about the benefits of an all meat diet was met with such skepticism that he and a friend agreed to be studied in a locked-in facility where they ate nothing but meat for an entire year under strict supervision to ensure they never ate anything else. They not only developed no nutritional deficiencies whatsoever, but claimed to be subjectively healthier by the end of the year. 5 Hardly what you’d expect from someone with a debilitating condition like scurvy!

So, is Greger lying, or just ignorant? He’s a medical doctor who has been studying veganism for a very long time, so I can only conclude he is lying in order to promote his agenda. I feel that his omissions and lies are just a sign of the desperation vegans are feeling that their religion is being threatened by the rise of people benefiting from the ketogenic and carnivore diets, as well as the mass exodus of vocal vegans returning to eating animal products after their health deteriorated. Their religion is dying.

Let me know what you think in the comments below.