Vegan B12 Deficiency Proves We Are Not Herbivores 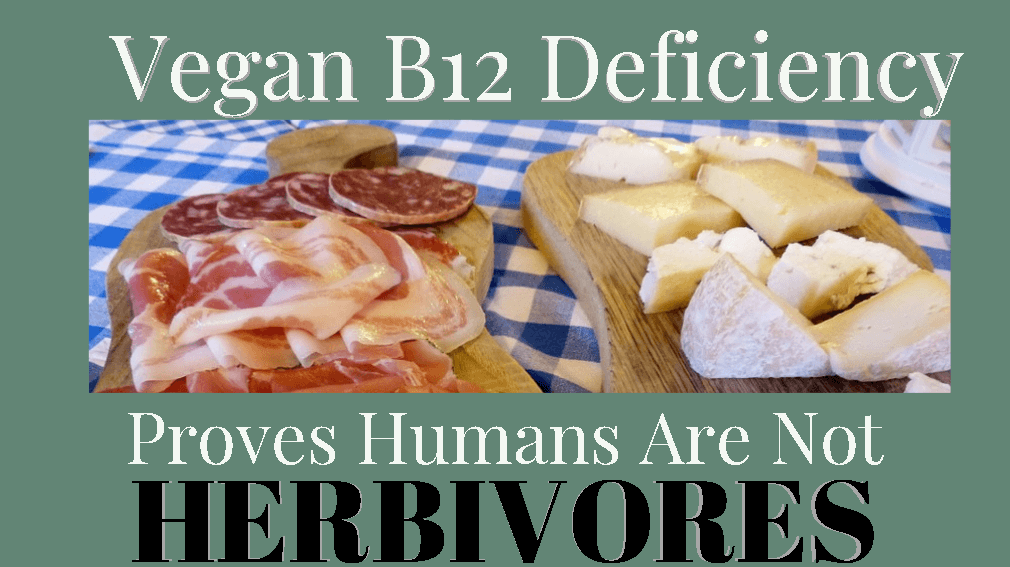 Occasionally you’ll see a vegan state that we would have got B12 from fruits and vegetables that were in the soil, but today we wash them off. However, that’s not where the other primates get their Vitamin B12, and no sources mention soil as a potential dietary source of Vitamin B12.

This tendency of vegan B12 deficiency proves that humans are not evolutionary herbivores, but that “…the incorporation of animal matter into the diet played an absolutely essential role in human evolution” 2 and, in fact, nothing less than meat is what made us human.

Is B12 An Essential Nutrient?

First of all, lets discuss what Vitamin B12 is and why we need it. Vitamin B12 is an ‘essential’ nutrient. In biology, this means more than just ‘we need it’, it means, specifically, that we must meet our requirement for it by getting it outside of ourselves. In this case of Vitamin B12, this means from the diet. Contrast this to other primates, like gorillas, who also ‘need’ Vitamin B12, but they make and absorb it in their colons and, therefore, it is not an ‘essential’ nutrient for apes, as per the biologic definition of ‘essential’.

Lack of Vitamin B12 might first start with subtle weakness and fatigue, but if left untreated can lead to devastating symptoms such as heart palpitations and irreversible neurologic damage. Because it’s so important, the body the body has multiple methods of preventing a deficiency, such as storing it in tissues and intricate mechanisms to reabsorb it once it’s in the bloodstream.

With a complete absence of Vitamin B12 intake, it might take 3-4 years to develop a deficiency 3. Yet vegan humans still end up becoming deficient, especially children, for whom a deficiency might cause permanent cognitive impairment and even brain atrophy 4.

As we point out on our pages entitled Vegan Doctor Admits Humans Need Saturated Fat, we discuss in detail how the great apes make and absorb saturated fats from their gut bacteria so they can eat what is seemingly a low fat diet while actually getting around 57% of their calories from saturated fats.

Evolutionary biologists believe that our early ancestors were herbivores who could also make their own saturated fats, but lost this ability after millions of years of ingesting saturated fats in our diet at levels high enough and consistent enough that we simply had no need to make it any longer, even as an emergency back up plan.

Vitamin B12 in Human Nutrition: Milk is a Major Source

Vegan B12 Everywhere and Nothing to Absorb

Interestingly, while humans lost the ability to make all but a small amount of saturated fat in our digestive tract, the bacteria in our colon still make enough Vitamin B12 to meet our needs. But there’s a glitch in the matrix. A quirk of evolution that separates us from the great apes who derive all of the Vitamin B12 they need from the bacteria in their gut.

The quirk is that, while the great apes simply absorb the B12 they make in their colon, our colon is incapable of absorbing it and, instead, excretes it out in our feces. 6 Humans only absorb Vitamin B12 ‘upstream’ from the colon in the small intestine. Even if we are ‘dying of thirst’, so to speak, from lack of Vitamin B12, we will not and cannot absorb the B12 that our body is making inside of us, while the great apes will happily eat their vegan diet and get plenty of B12. 7

Getting B12 From the Soil

Before we get to our final point, lets discuss, for a moment, the idea that vegans claim our hominid ancestors would have obtained B12 from the soil present on unwashed vegetables and from simply touching the ground and inadvertently putting the soil in our mouths.

While theoretically possible, it hardly seems reasonable, especially since our brethren apes eat almost exclusively from above ground sources of plant matter that aren’t particularly dirty. That argument may be more plausible after the advent of agriculture, but not prior to it.

Secondly, why would our ancestors have developed an elaborate method to extract B12 from ingestion, AND at the same time eliminate our colon source of this critical vitamin if we were only getting such tiny amounts from soil.

And that leads us to our final point…

This Proves We Evolved Eating Meat

Think about this for a moment. The human body actually makes plenty of Vitamin B12 in sufficient quantities to meet all of our needs, yet we REQUIRE Vitamin B12 in our diet. Even if we are profoundly Vitamin B12 deficient, the body will simply waste the b12 that is created in our colon even though all of our closest relatives absorb this internally made B12.

Why would this occur? Well, cover your eyes and ears vegans because this matches what evolutionary biologists and anthropologists all agree on- humans, in order to become humans, ate meat. And if you think about this long and hard, we not only acquired an entirely new way to absorb Vitamin B12, but we completely lost the ability to absorb b12 in the colon… because we had no need to make B12 in the colon any longer! This can only mean that we had such a large and constant source of external B12 for so many millions of year, that we actually changed our entire physiology to adapt to it.

Previous Post Rapidly Aging Vegan Dermatologist Doesn’t Know Collagen is an Animal Product! Next Post Why are Vegans Protesting Farms and Not Exterminators?