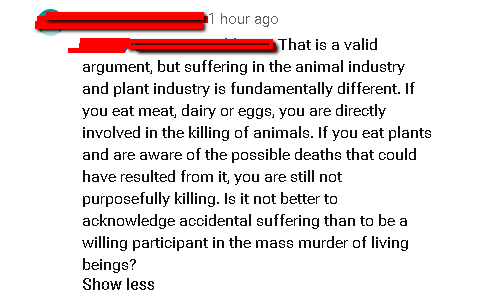 In this episode of Poor Vegan Logic we’ll explore the silly vegan idea that veganism supposedly only kills animals accidentally, and that being indirectly responsible for animal deaths is morally superior to being directly responsible.

Lurking where vegans have conversations is always a fun and interesting way to see how they react to the fact that their way of life kills so many animals that The Carnivore Diet is More Vegan than a Vegan Diet.

The comment below is another hilarious example of poor vegan logic that it’s adherents obviously have not thought about too much since it’s so obviously and provably wrong. Here’s an example of this argument when someone showed them our article about vegans killing more animals than carnivores.

This one is interesting because they seem to mix up two different concepts. Are they discussing:

We’ll just discuss both concepts since both are illogical, quick and easy to debunk, and excellent examples of poor vegan logic.

So they seem to be saying that DIRECT killing is less ethical than INDIRECT killing. This is obviously false, and is even encoded in the human legal system whereby someone who contracts for a murder is still responsible for that murder just as if they were to have done it themselves.

If indirect killing was more ethical, regardless of the knowledge one has that it’s your consumption that is having the animal killed or how many are killed, then we could all just let the abattoir kill our meat, buy it in a grocery store, and vegans would be satisfied with this.

Obviously vegans do not believe that meat eaters are absolved of responsibility simply because they didn’t do the killing themselves, so why do they not hold themselves to the same standard? Because someone else applied the pesticides they are absolved of their responsibility for their food choices? This is a typical example of a double standard using bad vegan logic.

The other argument made is the accidental vs intentional deaths. This argument is even more ridiculous since one can hardly call the mass killing of insects by intentionally spraying pesticides, the poisoning of mice and rats in fields, the destruction of the homes of spiders and birds during the harvest, and many other animal deaths that occur to bring plants to a vegan’s plate ‘accidental’.

Perhaps they mean the deaths that accrue when:

What both of these (weirdly intertwined) arguments say to me is that vegans aren’t actually interested in the death toll of their food. They are only interested in making sure they FEEL good about what they are eating and having their lack of guilt and responsibility be accepted by those who collectively consider themselves morally superior in their ignorance about the total death toll of their food choices.

In other words, it’s bad vegan logic that animals on your plate are important, but the small ones that can’t be quantified easily and don’t end up on your plate are not, no matter how many of them are killed or why. The vegan below seems to agree. And that’s why The Carnivore Diet is More Vegan Than a Vegan Diet.