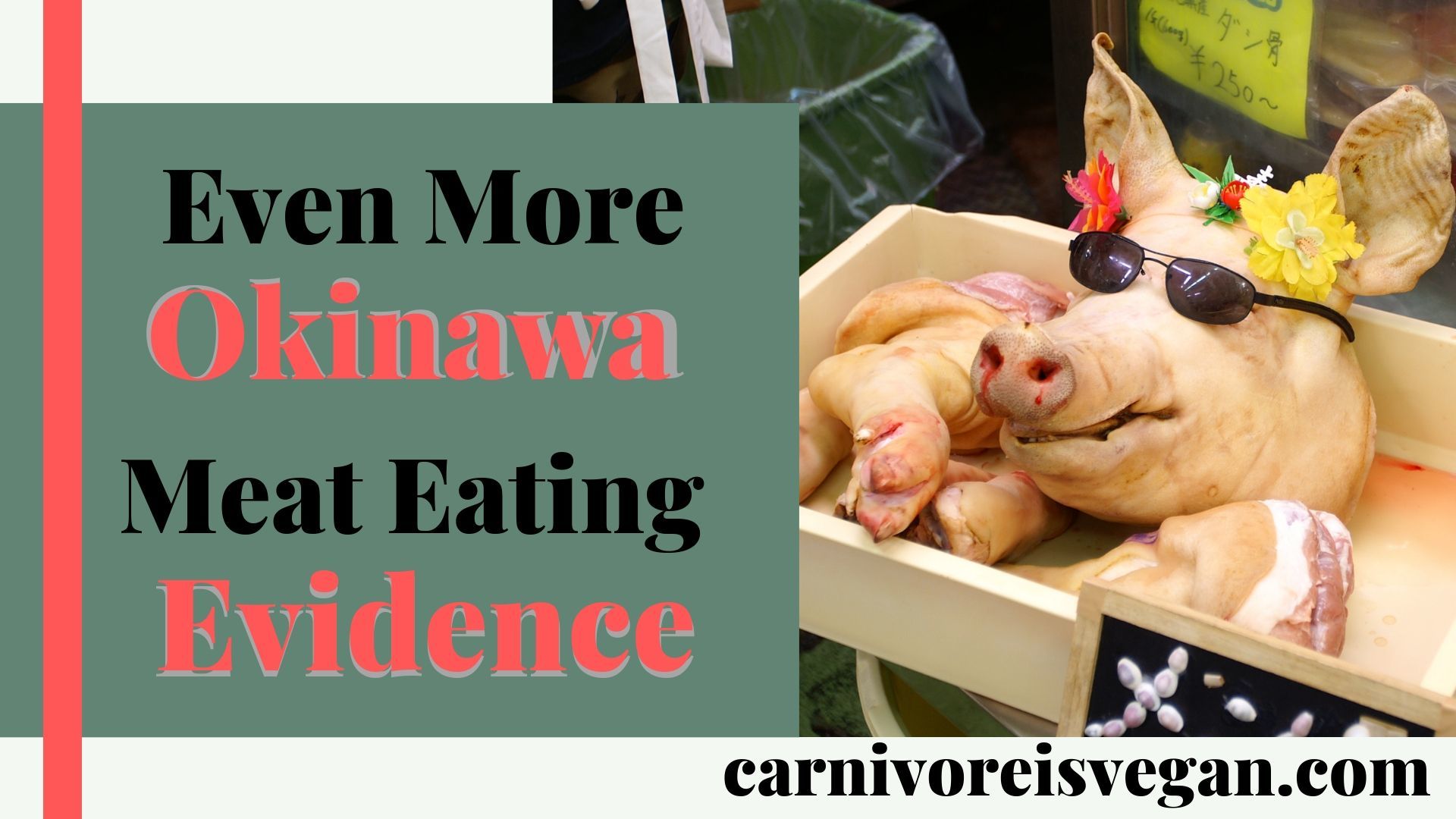 In the vegan world, the best evidence they have for veganism is, ironically, the non-vegan Okinawan Diet, giving it’s eaters their famously extreme longevity. But since the Okinawan diet is not vegan or vegetarian, vegans will trot out the old trope that they are ‘plant-based’ and so… somehow… the fact that they definitely included meat in their diet supports veganism in some strange way.

There have been many sources providing contrary evidence to this claim that vegans will completely ignore, such as YouTube videos going to the giant Okinawa Fish Market or doing a Grand Okinawa Food Tour (which, ironically introduces the video by saying, “Welcome to Okinawa, the island of beaches, sunshine, and good pork”), the Weston Price Society True Blue Zones Series, and even just going to Flikr and using the tag Okinawa Food.

A Fortuitous Find from Nat Geo

While I had fantasies of going to Okinawa myself to see what the real Okinawa diet is all about, I had to settle for looking through some old National Geographic magazines where, lo and behold, I find an article, I’d never seen referenced, just loaded with evidence that Okinawa is a heavy meat eating culture, as would be expected for an archipelago infested with wild pigs.

Much was what I would have expected, but there were also a few surprises too. Lets delve into this great article from a September 1969 National Geographic magazine highlighting the Okinawa Diet that would be free from bias since there was no vegan agenda at that time.

Pork in the Okinawa Diet

While this shouldn’t be any surprise, the Okinawa diet contains pork. As I pointed out, the Okinawa Food Tour video above opened by saying, “Welcome to Okinawa, the island of beaches, sunshine, and good pork”, not the island of good sweet potatoes!

An inset on page 432 illustrates that they have so many pigs it’s become a problem to farmers by explaining, “They find it more difficult to control the wild pigs that raid their fields. One ingenious grower sometimes sets out fermented mash at night; next morning he picks up the inert, inebriated porkers for butchering.”

Surprisingly, in this land of extreme longevity and ‘near veganism’, as the vegans claim, one of their favorite pork products is Spam, about 1 can a week per person. To make matters worse, their favorite Spam dish is Spam and eggs, a double whammy for vegan claims that the Okinawa Diet is mostly sweet potatoes. 1

Living in a Sea of Seafood

While the resources that discuss Okinawa’s so called ‘plant based’ diet barely mention anything about seafood, this article made only a single mention of sweet potatoes, and made numerous references to seafood and fishing.

The author details his visit to the busy fishing town of Itoman where his host explained why their town is more matriarchal than others, “We have a long history of seafaring here. The men were at sea for long stretches, always in danger of never coming back. So wives took care of the family finances and ran things at home. Property often was recorded in the wife’s name, and passed down through daughters and not sons.”

A large full-page image of a fisherman at dusk has the caption, “On some of the more remote Ryukyu Islands, fishermen claim hereditary ownership of fishing grounds and octopus holes. Conflicts frequently arise, as a local proverb attests, ‘Trouble about a woman is temporary, but trouble about a fishing ground is permanent.’ “

The article also mentions that the “seamen-traders won renown and brought a golden age to the Ryukyus in the 15th and 16th century”. This hardly sounds like a country that subsists on sweet potatoes and, considering that the rest of the Japanese Eat a Lot of Meat, it’s unlikely that an archipelago with a name that translates as “rope in the ocean” and having such a long history of fishing foregoes putting seafood on their own dinner tables.

One aspect of Okinawan culture I was surprised to see was that they also have bullfighting! While the sports are similar, being done in an arena as an entertainment sport, unlike Mexico and Spain, this sport is bull against bull.

Unlike traditional Spanish bullfighting where the animals are mortally wounded, in Okinawan bullfighting, it’s more of a sumo wrestling match than a fight for survival. The animals are usually only slightly injured, if at all.

As would be expected, however, the animals are not only kept for sport, but are slaughtered for meat once they become of little use for sport. 2 Also unsurprising is a place that keeps bulls for sport likely keeps dairy cows, and Okinawa is no exception. 3 In fact, the island dairies have a difficult time keeping up with retail store demand and are considering importing milk from the mainland. 4

Just like on the Faroe Islands of Denmark, the Japanese of Nago Bay still engage in the controversial practice of hunting pilot whale and porpoise, which may show up on menus as kujira-ryori, or whale cuisine 5 6.

While the fishing town of Taiji on the mainland was thrust into the international spotlight with the film, “The Cove”, that highlighted this practice, Nago Bay has also practiced taking pilot whales since at least the 1600’s. 7 Humpback whales, weighing in at an average of about 66,000 lbs, were still hunted up until 1972, but today only pilot whale and porpoise are still being taken for food.

While vegans would like you to think that the Okinawa Diet is virtually meat free, thousands of years of historical fishing, whale hunting, wild pig hunting, bullfighting, and a dairy industry that can hardly keep up with demand hardly sounds like the ascetic plant-based diet that vegans would like us to think the Okinawans have traditionally eaten for thousands of years. It’s much like the vegans co-opting the Japanese as near vegans, when, in reality, the Japanese Eat a Lot of Meat as well.

Previous Post The Japanese Eat a Lot of Meat! Next Post Hong Kong: Stop Living So Long. You Eat Too Much Meat!