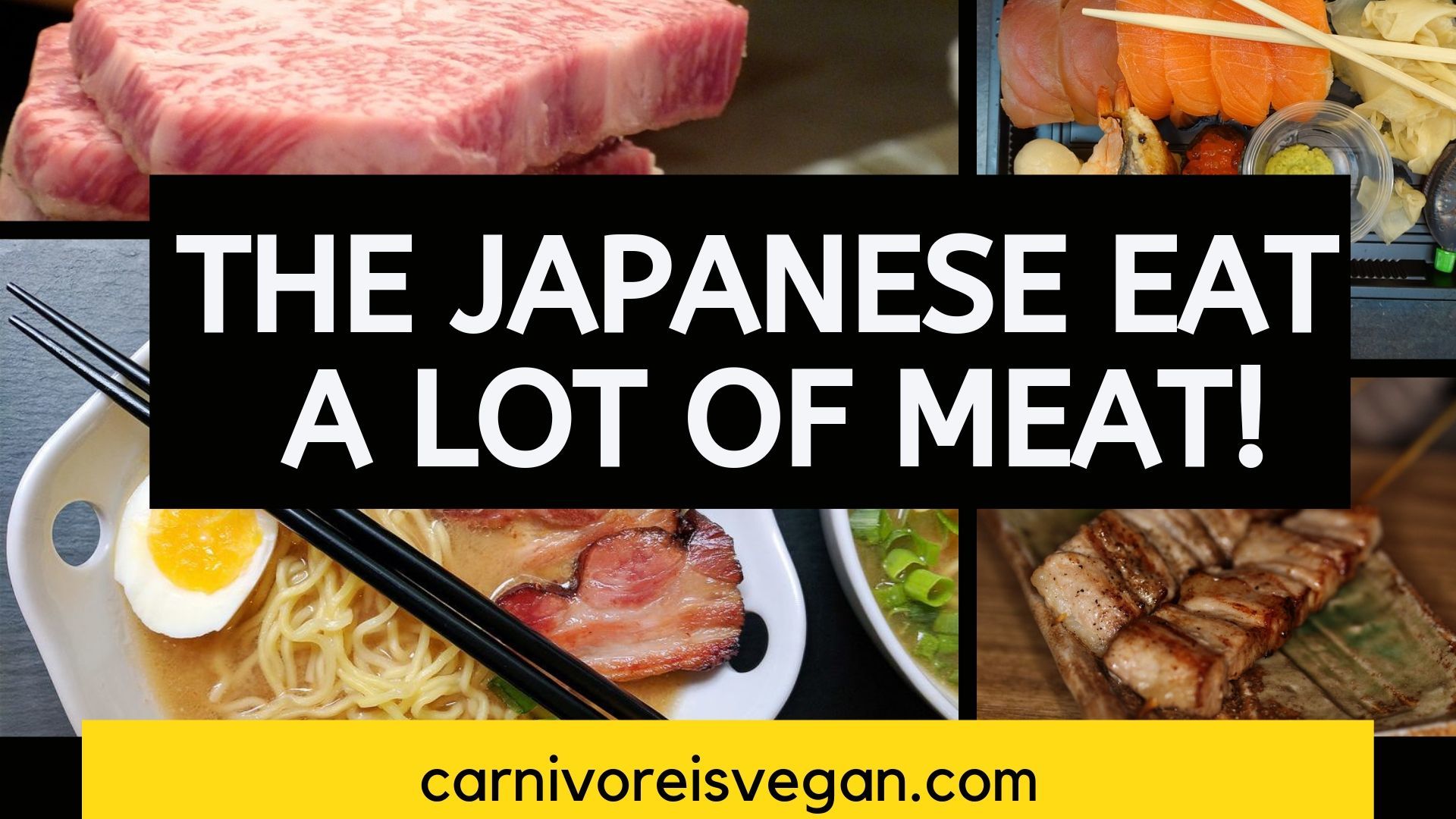 How much meat does the so called ‘plant-based’ Japanese Diet actually have in it per day? Since there is no objective (measurable) meaning of the term plant-based from any authoritative source, we’re going to pin down exactly how much meat the second longest-lived country in the world eats. 1

Why are we doing this? Well, because there is actually no evidence a vegan diet is healthier, more ethical, or more environmentally friendly than a meat-containing diet, as vegans like to claim, and may very well be inferior on all of these accounts.

They will Move The Goalposts, as they always must, by saying there are plenty of studies showing a ‘plant based’ diet is all of those things, even though that is neither vegan or vegetarian, but a diet that actually contains animal flesh! In fact, just like the Okinawan Diet, the Japanese actually eat a considerable amount of meat as this Japanese Eat Fat to Be Healthy video shows.

How Much Meat Does Japan Eat?

But what exactly do they mean when they claim that someplace is ‘plant based’? Lets take the case of Japan, which is in the top 5 longest lived countries in the world. How much meat does this ‘plant based’ country actually eat. Well, as we have pointed out in the article Dairy is 2000 X’s More Ethical Than Almond Milk, these types of questions are often a math problem. A math problem that vegans are unwilling to do because they know it won’t turn out in their favor. Therefore, we have to do the math for them.

In this case, all we have to do is to divide the population by the amount of animal products it consumes each year. The information isn’t particularly difficult to find since most of the information comes from industries that report to the government.

While their are bound to be some inaccuracies, such as not counting the meat sold to tourists, it’s going to still be fairly accurate since, of course, the Japanese also leave Japan on vacation making up for these numbers and, certainly, the fisherman, cattle ranchers, and egg sellers don’t report their own consumption or sales to neighbors and friends.

I specifically ensured that the data I included did not include exports, but was specifically consumption, inside the country, of these animal products per year So lets tally these up. All sources are at the end of the article. If the source was not an official source, I sought to find several sources that stated the same numbers. The meat and dairy are in pounds/person/year.

Which makes the per day totals:

So far, we aren’t looking at a tiny amount of animal protein here. To put this into perspective, the average person on the Carnivore Diet, a diet that is a 100% based on animal products, eats about 2 pounds of meat a day. By the way the vegans talk about Japan, you’d think they ate a plate of rice with only a sliver of meat, but over a pound a day of total animal flesh is a significant amount of meat!

This significant amount of animal products is confirmed by hundreds of videos, like this one entitled, School Lunch in Japan – It’s Not Just About Eating! where the schoolchildren get a healthy sized fish filet and an approximately 8 ounce carton of milk for their lunch, and this How to make ★Shogayaki★Japanese Ginger Pork video where she shows her whole meal at the end.

Incidentally, that’s also 4 mg of heme iron. As is pointed out in the page on Leghemoglobin: the Vegan Bloody Burger Conundrum, vegans claim that even 1 mg of heme iron per day will increase your risk of heart disease and cancer. But the Japanese get 4 times that and stay healthy, while the longest lived people in the world, those from Hong Kong, get 8 times that amount and stay healthy! Sounds like these vegan claims are just downright silly.

Lets Put This Into Calories

I used the Chronometer app to turn the weights into calories. In doing so, I chose tuna for the fish since that’s a common fish the Japanese eat. For the other meats, I chose the leanest cuts to not skew the calories in favor of meat eating. This gave total grams of fat from animals at 44 grams. The total fat gram consumption per day in Japan is 54 grams 9, so that seems reasonable considering at least some of their fat will be from plants.

Calorie content of their animal product intake (as per Chronometer app):

So the Japanese eat approximately 31% of calories from animal products. About 1/3 of their daily intake at minimum since we are assuming they use the leanest cuts of meat and assuming all of their other fats are plant based fats. But Japan is renowned the world over for it’s Wagyu beef, which is the most marbled beef in existence, their pork cuts are often fatty pork belly, and often a scoop of pure pork fat or butter is added to ramen soups with a meat-based broth! 11 The Japanese are not afraid of nor do they avoid saturated fats.

So where do vegans get the idea that not eating meat is ‘ideal’ for health when their precious Japan gets 31% of it’s caloric intake from animal products? Certainly, we could call this ‘plant based’ since less than 50% of their calories come from animals, but just like there’s a lot of Meat Eating In the Okinawan Diet, it’s far from vegan or even vegetarian. You can also see my page on Hong Kong, Which Eats the Most Meat in the World and Is Also the Longest Lived Country in the World.

Hong Kong: Stop Living So Long. You Eat Too Much Meat!

Previous Post What is the Carnivore Diet (and What it’s Not!) Next Post More Okinawa Diet Meat Eating Evidence