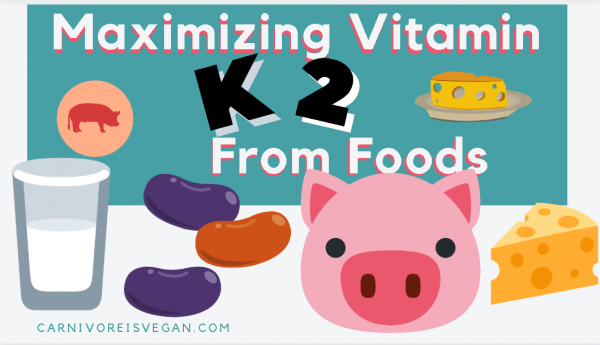 You can jump to the K2 in Foods chart  (below) of Vitamin K2 containing foods below if you wish. But I’ll provide a little background on K2 above the chart here if you’d like more information about K2 and the details of the Maximizing K2 in Food chart.

Vitamin K2 is present in two different forms: K1 and K2. Vitamin K1 is present in green leafy vegetables and is poorly absorbed, while K2, also known as menaquinone or MK is made by bacteria and is present in only a few foods in nature, mainly natto, liver, and cheese, but is absorbed approximately 10 times better than the K1 from plants. Absorption rates were between 5-15% of K1, with almost 100% absorption of K2! (1) (2) (6). While Vitamin K2 has been well-studied for it’s role in blood coagulation, it’s more recently being found to be vital in bone health, heart health, and for it’s role in modulating inflammation.

While cheese, natto, and liver pate are the most well-known Vitamin K2 foods, I was surprised to find that pork sausage and heavy cream were exceptionally high in K2, which is good news for carnivores. Unfortunately, bacon and Canadian bacon were so low that I didn’t even bother to include them. Cheeses vary wildly in their amounts of K2, not only due to variety, but also due to whether they were fermented using  Lactococcus or proprinibacteria,  but also the length of time they were left to age and their fat content.

"Moreover, circulating K2 concentrations after the consumption of natto were about 10 times higher than those of K1 after eating spinach."

Determination of phylloquinone and
menaquinones in food

We've tried to summarize the available literature in order to derive a chart that will best allow you to maximize your K2 using food choices, in particular, the different types of cheeses. We've chosen to sort the list according to maximal amount of K2 rather than alphabetical in order to help you maximize food choices over making it easy to find any particular food.

Each food has a numbered reference you can check below. Different studies may have found different amounts of Vitamin K  in the same cheeses. We attempt to make it as clear as possible how much Vitamin K is present in each food, but it's not always clear. For instance, they tested many different cheddars, but did not give the brands.

I simply included the range of values from the different studies or different cheeses tested of the same type. It's obvious that there is a wide range of Vitamin K values, even from different brands of the same types of cheese, so you are not going to get the satisfaction of getting an exact amount.

The only clear choice for choosing cheeses seemed to be that full fat beat lower fat contents of cheeses (10).

Unfortunately, for other characteristics there was no clear association such that you could just choose a hard cheese over a soft cheese or a more aged cheese vs a lesser aged cheese. There were some clusters, but the ranges within the individual cheeses were so wide that it wouldn't make sense to recommend anything but specific cheeses. For instance, some soft cheeses clearly had the highest scores, but some individual soft cheeses ranked so low that you'd have been better off choosing a cheese from the least best cluster. (image below Vitamin K chart)

Since K2 is produced by bacteria, it would seem logical that more aged cheeses or fermented dairy would have a higher K2 content, but that did not always prove to be true even in the same cheese. The variables are, unfortunately, too complex to be able to give any type of simplistic recommendation like that. 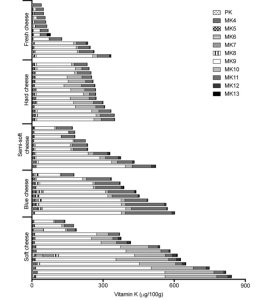