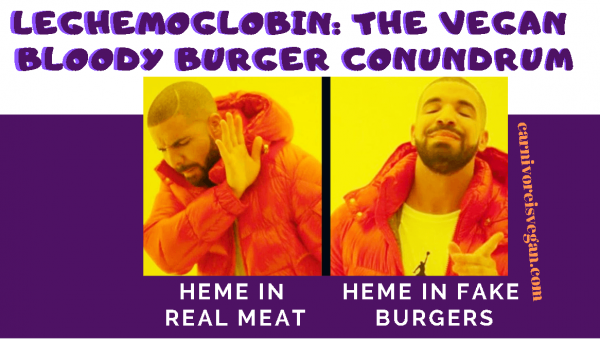 The Impossible Burger has a big problem that vegans will need to be doing some explaining about. Their problem? An ingredient called Leghemoglobin, also called heme or heme iron. What’s the problem about heme? Well, it depends upon who you talk to (and whether you talked to them before or after Impossible burgers were created).

Leghemoglobin is the ingredient in the Impossible burger that gives it the ‘bloody’ look and savory meaty taste. It’s found naturally in TINY amounts in a few legumes (the ‘leg’ stands for legume) plants, but Impossible Foods, in a process they explain HERE, has taken it to the factory for mass production. The fact that it’s genetically engineered and created in stainless steel vats in a factory is not the problem with leghemoglobin that we’ll be discussing. It’s its existence in their ‘burger’ at all! I’ll explain.

If you’d have asked any vegan for the past 10 years, heme is a colon cancer promoting carcinogen that is one of the main reasons no one should eat meat. But now, it’s not only an ingredient in the Impossible burger, they call it their “magic ingredient”. Note that “magic ingredient” is in quotations. They really call it that. What vegans have claimed is a heart-disease promoting carcinogen is now desirable magic of the Vegan Big Processed Food conglomerate!

So, What Exactly is Heme?

Heme, whether leghemoglobin or from meat, is the iron-containing molecule in blood. It’s what put the heme in hemoglobin that we can measure in everyone’s blood. More importantly, straight from Impossible Burger themselves, it’s “something we’ve been eating and craving since the dawn of humanity” and is “essential for life”. 1

Unfortunately for vegans, there’s only trace amounts of it in plants. It’s only something we’ve been eating and craving since the dawn of humanity… because it’s the iron-containing substance in meat and blood.

And that’s why the scientists at Impossible Foods are so desperate to reproduce it. It gives their product the cravability they need to have people want to eat a bunch of processed vegetables since this ingredient is designed to reproduce, as closely as possible, the experience of eating meat! The irony is certainly going to be lost on vegans, but certainly not on the food producers who are betting big stock market profits that all humans, vegans included, absolutely love and crave meat.

But wait a minute, before the Impossible Burger, vegans considered heme iron as a heart-disease, stroke, and diabetes promoter, as well as a carcinogen on par with cigarettes! Vegan ‘gurus’ like Dr. Michael Greger, Dr. Joel Furhman, and Dr. John McDougall consider heme iron to be one the main reasons to stay away from meat! 2 3 4

With the advent of the Impossible Burger, however, Big Veg is now adding this substance to their burgers and calling it healthy. And not a single one of these gurus or vegan proponents are denouncing this ingredient as unhealthy. In fact, there is a whopping 3 mg of heme iron in the Impossible Burger. We’ll come back to the significance of that in a moment.

“We make the Impossible Burger using heme from soy plants — identical to the heme from animals — which is what gives it its uniquely meaty flavor.”

WHAT IS SOY LEGHEMOGLOBIN, OR HEME?

Well, perhaps the leghemoglobin from plants is different from the heme in meat, has been proven safe, and that’s their justification for adding it? Well, we don’t even need to go into the science in order to bust that myth. It states right on the Impossible Foods webpage that leghemoglobin is “identical” and “atom-for-atom identical to the heme found in meat, fish, plants and other foods.” 5.

Those statements, however, may be misleading, as reported in this excellent piece of journalism entitled BREAKING: Impossible Foods is “Misleading Consumers” About its GMO Protein, FDA Rejects the Claim That it is Safe for Consumption, and the documents acquired via a Freedom of Information Act request from the FDA to Impossible Foods also tells an interesting story for those who might want it as ‘Exhibit A’ against Impossible Burger at some point in time.

But remember, it’s Impossible Food claiming that it’s “identical” to the heme found in meat. We also told you that the addition of 3 mg of leghemoglobin to their product is important too. If you take a look at the image below, it shows two studies claiming that intakes of even 1 mg/day of heme iron will increase risk of cancer and heart disease by as much as 27%! 6 7 8

Yet, Impossible Foods is adding a whopping 3 mg of what vegans and multiple studies claim is a heart-disease promoting, diabetes-inducing, carcinogenic substance! So why are vegans and supposedly health-conscious people not up in arms about the health destroying effects of the heme iron that is not only contained in their products, but that is being intentionally created in vats and being ADDED to their products at an amount 3 times higher than has been shown to cause heart disease!

An Admission Heme Isn’t So Bad?

Shouldn’t Impossible Foods be stopped from adding known carcinogens to their foods? Shouldn’t the US FDA and other human health advocates be stepping in to stop them from increasing heart disease in the population by a whopping 27%?

The silence in the vegan community on the addition of heme iron to their foods is their deafening admission that it is simply not the problem they have claimed it was prior to the invention of fake bleeding meat.

What Meat Eaters Have Been Saying

Meat eaters have been claiming this all along and showing vegans how the science showing heme (and saturated fat) is dangerous is based on comparing people eating a ‘Standard Western Diet’ to people living a more healthy lifestyle. It’s simply comparing “apples to oranges”.

Humans would simply not be here if heme caused heart disease, cancer, and diabetes. Remember, even Impossible Foods admitted that the heme iron in meat is “something we’ve been eating and craving since the dawn of humanity.”

Humans have not only eaten heme, but an entire body of studies of bone isotopes of ancient modern humans in Europe show that, for at least the past 50,000 years, we ate a higher percentage of animal protein than even obligate carnivores like the big cats! 9 10 11 12 13 14 15

Yet humans not only lived healthy lives, as evidenced by our ancestors’ bones, but evolution obviously selected for us eating the diet we evolved on, making us the top apex predators in the world that we are. Throughout humanity, cancer, heart disease, and diabetes were so incredibly rare as to be almost unknown prior to the mass ingestion of processed plant foods like sugar and flour. There is no animal on earth for which the solution to their chronic health problems is to STOP eating the diet that evolution selected them for.

Yes, the ingestion of ‘too much’ iron, no matter the source, which is the problem in a disorder called hemachromatosis, is going to be a problem, but Americans today are getting MORE of these diseases even as heme iron consumption has been essentially stable (within 1 mg) for over 60 years. 16

Additionally, the longest lived country in the world, Hong Kong, also has the highest per capita meat consumption with approximately 590 grams of meat consumed per day (1.3 pounds). 17 18 19 20

Their daily consumption of heme iron tallies in at almost 8 mg per day. That’s 8 times the amount of heme iron that is supposed to be giving them the heart disease, strokes, and diabetes they aren’t getting. While Japan is getting a daily average of around 4 mg eating their 1.1 pounds of meat per day, as we point out on our page The Japanese Eat a Lot of Meat. Obviously, the characterization of heme iron as a potent health hazard isn’t as bad as is being claimed. Vegans are well-aware of this or they would be crying foul.

Vegans can no longer denounce heme in meat as a carcinogenic, heart disease and diabetes-inducing substance without the implication that Impossible Burger is intentionally adding carcinogenic, heart disease and diabetes promoting genetically engineered substances to their products! So which is it vegans? You need to choose. Were meat-eaters right all along and heme is not a problem? Or is Impossible Burger trying to poison you with plant based, genetically engineered heme made from leghemoglobin?