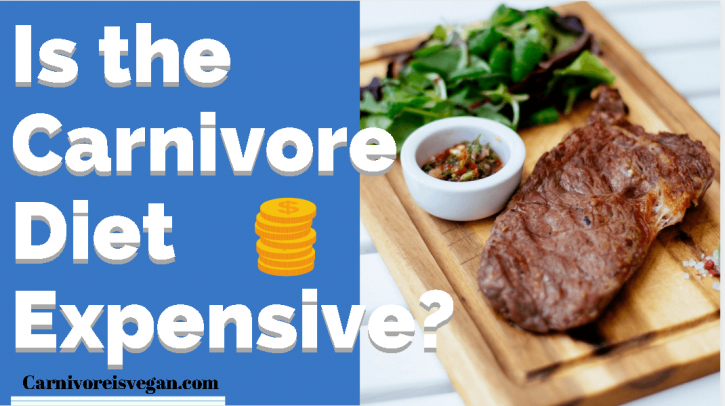 Is the Carnivore Diet Expensive? Everyone seems to think that eating only meat costs a lot of money, but we’ll show you that even on a very tight budget, you can do this diet. How cheap can it get? Well, I’m in the US , and I’ll do the numbers for what’s locally available to me, so obviously this won’t apply to everyone everywhere, but it will give you a good idea of just how little it’s possible to spend and do this diet.

I’m going to base my numbers off of a hypothetical 2500 calorie a day diet and base it primarily on beef, since that seems to be what most people gravitate towards, but you can use whatever meats you like and that work for you. So, is the carnivore diet expensive? Lets find out.

Can You Really Just Eat Beef?

Yep, you really can eat nothing but beef. Kelly Williams Hogan, one of the outspoken faces of this movement has been eating virtually nothing but ground beef for 10 years! So, yes, these numbers are based on absolutely realistic meal plans.

Many people get worried about getting bored with just eating beef, or even just eating meat in general. While there is some boredom that sets in after a few weeks, it passes. After that, food boredom simply isn’t an issue. Likely because beef is so nourishing, your body will look forward to most meals and, if you don’t, you’re probably just not be hungry. Wait a few hours and you’ll think that beef will sound wonderful again.

To make the carnivore diet as affordable as possible, the first order of business, if you don’t already have a place to get inexpensive meat, is to go to MyGroceryDeals, put in your zip code and find deals in your area. Two other great resources are Costco and looking for wholesale meat distributors and restaurant supply warehouses like the Cash&Carry (also called Smart Food Service Warehouse) that is a large chain specializing in supplying bulk food to restaurants and is open to the public.

If you live near ANY medium sized town in the US, there will be some place where most of the restaurants get their food at wholesale prices. You may have to buy in bulk slabs or boxes of 15-30 pounds, but it’s well-worth the initial outlay to save money in the long run.

You can cut the large chunk into pieces and wrap to freeze if you prefer. Here’s a typical deal from a restaurant supply warehouse near me. Note that those are approximately 20 pound untrimmed (fat layer still on) vacuum sealed slabs.

I’m going to start off the first calculation with the easy to do math of an all beef brisket diet. I’ve specifically chosen brisket because, being so fatty, it has one of the highest caloric contents of any of the beef cuts. But do keep your eyes open for sales since it’s not unusual to find ground beef on sale for $1.99, which would bring your costs down even more.

I said above that I did the math for an approximately 2500 calorie a day diet, which is the approximate needs for an active man according to the US Government. The Chronometer Food App, which all of these estimates are based on, says that 2500 calories of brisket would be 26.8 ounces with the macro ratios at 70% fat and 30% protein, which is a good starting point on a carnivore diet. Some people might need less or more fat, but it’s a good place to start.

Now, when you get a big slab of untrimmed brisket like I get from the restaurant supply warehouse, it has a HUGE layer of fat on it. It’s so fatty that after cooking enough for a couple of days in my Dutch oven (it tastes wonderful the next day warmed up in the grease left over in the bottom of the Dutch oven or in the air fryer), I can pour off about a pint of fat to save for later cooking. You can also save the bacon grease for the same reason.

That will save you even more money not having to buy any butter or animal fat to cook with. So you really can use just this brisket for your food budget for an entire month. OK, maybe you need to add some salt (but even that is debatable).

That’s pretty good, but that’s using $2.99 a pound brisket. We can do a LOT better! I can very often find ground beef on sale for $1.99 a pound, as we discussed on the Beef vs Beans, How Vegans Deceive page. Adding in some eggs and cuts that are even cheaper can lower our costs even more.

Lets Add a Bit of Variety

Getting 2500 calories a day for 30 days is 75,000 calories a month. So, we’ll do a variety of animal proteins based on local deals that are actually available from the deals I find on MyGroceryDeals and from the Smart Food Service Restaurant Supply Warehouse near me.

Yes, these are ACTUAL real life costs that I can get in my own neighborhood on a regular basis without even having a big box store membership, which might even be cheaper.

For a total of: $97.41 /30 days= $3.25 per day. Now were’s talking. This gives us a macronutrient count of 62% fat and 38% protein, which might be a little low for some, and they might have to tweak to add more egg yolks, butter, or bacon to improve their ratios, but the costs wouldn’t be significantly different.

I’m sure if someone took the time to tweak the amount of the cheaper cuts of meat or clip coupons, they could bring those totals down even lower. However, to put this into perspective, this is less than $100.00 a month and less than a fancy coffee per day!

The table above is the average monthly benefits qualifying Americans living in poverty receive from the US government. Please take a look at the top right number of $134, which is the average monthly food benefits received. In other words, with some prudent management, the carnivore diet would cost you less than what is given to those living under the poverty line by the US Government SNAP (food stamps) food benefits program.

Stop and think about this for a moment. Those living under the poverty line on government assistance can still afford the most nutrient dense diet on the planet!

Compare to US Dietary Guidelines

Now, just for fun, we are going to compare this cost to the recent EAT-Lancet study, which, for all intents and purposes, could be considered the US dietary guidelines. Fortunately, they did a study entitled Cost and Affordability of the Eat Lancet Diet in 159 Countries. They used a calorie base of 2503 calories, which is why I chose the seemingly arbitrary number of 2500 calories from the start.

Remember, you do not NEED coffee, sparkling waters, or spices except salt. Around $100.00 a month US will meet 100% of your nutrition requirements! Most people spend more than that on fancy sugary coffee concoctions that make them fat and sick. Shop deals, do the math, and you’ll find that the answer to the question of, “Is the carnivore diet expensive” is a resounding no.

If you were thinking of trying the carnivore diet, but were holding back because you thought it was too expensive, don’t let that myth hold you back any longer. Give it a try!

Previous Post Dairy is 32,000 X’s More Ethical Than Almond Milk Next Post What is the Carnivore Diet (and What it’s Not!)