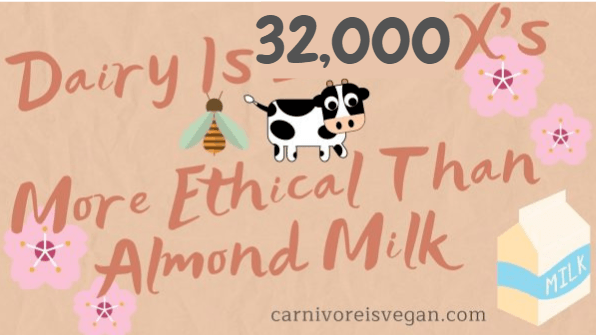 What is the Ethics of Dairy vs Almond Milk? I’ll lay out the facts and you can decide for yourself (if you are rational). We’ve already discussed how Mushrooms are Not Vegan, but the death toll from almonds outstrips that of mushrooms by an order of magnitude in the forced labor and ultimate death of bees.

You’ve probably heard about bee colony collapse disorder and maybe have even heard that the numbers of bees is in serious decline. It’s absolutely true and a major potential world food threat. 1 How bad is the problem? While accurate numbers are obviously hard to come by, the estimates are shocking:

But why is this happening? While the problem is multifactorial and includes loss of habitat, climate changes, and introduction of non-native species, two of the largest factors in the decline of bee species is:

First, please understand that vegans oppose dairy and honey, with the official stance of the Vegan Society claiming that to use animals to produce these products is inhumane, causes animal suffering, and should be opposed. 3 Yet, there is no similar mention of pollinators for crops on their entire site, nor the Enslavement of those same Dairy Cows for Fertilizer.

However, the same bees that they oppose using for honey are an absolute necessity for pollinating up to 75% of the world’s crops. But if you are picturing wild honeybees being naturally attracted to the wonderful scents of almond blossoms and happily taking their nectar home to feed the hive, you couldn’t be further from the truth.

Instead, imagine a $200 billion industry where bees are worked about 9 months out of the year while being trucked all over the country for each of the different harvests where, at the end of the season, between 20-40% of the billions of bees sent around the country will have perished.

It begins in California where up to 70% of all U.S. bee colonies are transported each spring to pollinate almonds. Almonds require such intensive use of bees, and there are so many orchards making nuts that vegans use to mimic the animal milk dairy they obviously crave, that between 20-50% of the bee population dies just pollinating this one crop. 4 5 6 7 8

“Globally, insects supply pollination services [what vegans would call slave labor], valued at US$215 billion in 2005, to about 75% of crop species” [emphasis mine]

But those are just a few of the agriculture crops that ‘enslave’ bees to do ‘forced labor’ for pollination. Renting the ‘enslaved’ bees not ultimately killed from pollinating the previous crop is big business! Here’s a List of all the ‘non-vegan’ foods that bees are enslaved to pollinate. So, are almonds vegan?

How does it make sense in a vegan’s mind that honey is not vegan because it enslaves bees and takes away their food, but enslaving them to pollinate crops (and also take away the honey from the pollination of those crops) is somehow not the moral equivalent? If honey is not vegan, then almonds are not vegan either. 9 10

More likely, they just know that there is simply no vegan solution to pollinating crops, so they ignore it, like they do for The Vegan Fertilizer Problem, and still pretend to be morally consistent.

Obviously, the pesticides used in growing almonds aren’t intended to kill the bees, they are mostly intended to kill the peachtree borer, Synanthedon exitiosa, an insect that bores into the trunks and branches of almond (and peach) trees, and will eventually kill them if not treated. This obviously makes the almond death toll even higher than just the deaths of bees. 11

But even if vegans are eating organic almonds, bees are required for pollination, and the trees are treated with a specific type of nematode that will eat the peachtree borer larvae. Obviously this requires the breeding and enslavement of millions or billions more animals just to satisfy the protein and fat needs of plant-based eaters who want to feel morally superior by not looking closely into how their food is grown. Plant-based eaters simply can’t be vegan no matter how much they want to be. 12

Are Almonds Vegan?
Billions vs Millions of Deaths

Are almonds vegan? There’s some easy math that vegans could do in order to determine the ethics of using almond milk vs grass-fed cow’s milk. This is a math problem. And here is the Math Spreadsheet (not updated for the 2018-2019 season where 50 billion bees were killed) for those who’d like it in a more concise format.

Update for the 2018-2019 harvests: the deaths for this season were an unprecedented 50 BILLION bee deaths. This is Five Times the total number of deaths from all livestock in the US. From Like Sending Bees to War. The Deadly Truth Behind Your Almond Milk Obsession. Numbers have been changed to reflect this year’s bee holocaust.

Now, let’s compare that to the dairy industry. There are 9 million dairy cows in the US, 15 most of which live for about 5 years 16, meaning that about 1.8 million dairy cows are killed every year and, unlike bees whose deaths are futile, the killed cows are used for food. Note, that’s MILLIONS with an M.

So the trade off for not breeding, ‘enslaving’, and shortening the lives of millions of dairy cows for milk and meat is breeding, enslaving, and shortening the lives of billions of bees. Then there is the fact that the vegans already Enslave Dairy Cows For Their Fertilizer. If animals are animals, and cows don’t somehow have more inherent value than bees, then isn’t it more ethical to kill a few million cows for milk and protein rather than billions of bees?

The objection that vegans have to this, because they HAVEN’T done the math even though their objection is a simple math problem, is that vegans will insist that’s not a fair comparison since it’s not on a calorie per calorie comparison. Since we are using the animals for our nutrition and not simply for pleasure, the true measure of least harm comes from the number of calories per dead animal. So lets do that.

The Math for Almonds

Since the stats I gave on bee deaths are just for almond crops, we’ll only count the calories from almond production and for the honey they produce during the percentage of time they are in the almond orchards.

The Math for Cows

Now we’ll do the same for milk.
Last year there were 17,500 million pounds of milk produced 22

We also get to add the meat from the cows as well because, unlike the deaths from bees, the bodies of the cows aren’t wasted, but they also provide meat.

Calories For Each Death

That’s 32,131 more calories from every cow death than every bee death.

Here’s the Math Spreadsheet if you want to see the math all in one place. (not updated to reflect the 2018-2019 numbers)

Cows Are Fed Grains Though…

Vegans will say this is not a fair comparison because most cows are fed grains, which will increase the death toll for the dairy milk side of the equation, while the comparison is against grass-fed milk.

This is a fair comparison because we can’t, at this time, buy almond milk that has not been pollinated by bee slaves, but we CAN buy 100% grass fed milk right now. We are talking about what is MOST ethical that someone can choose to do right now.

Vegans always like to defer to some future fantasy world where their choices for ethics are consistent with a plant-based diet, but that world is not right now. In this world, right now, choosing grass-fed cow’s milk is 2500 X’s more ethical than almond milk. This is quantifiable.

This doesn’t even count the numbers of insects killed each year with pesticides (or in the case of organic almonds, they enslave other carnivorous insects to murder and eat the peach-tree borers).

Even with these numbers wildly favoring dairy, vegans will claim that the cruelty inflicted onto dairy cows is detestable and unmeasurable. But why is enslaving bees any less cruel? How is forcing bees to live out their lives in service to producing humans food in unnatural conditions any less cruel than forcing cows to do the same?

Insects also feel pain, and bees have shorter lifespans due to the stress of being shipped around the country and used for vegan forced labor. 23 24 25 26 27 In fact, the combination of chemicals and the stress they endure from forced pollination has been linked to bee colony collapse disorder. 28 So, again, vegans don’t get the moral superiority card in the cruelty comparison either.

Even if the numbers aren’t perfect (they can’t be), lets say they are incorrect by a margin of error of 50%, that still means that dairy is 1250 times more ethical than almond milk on a fair comparison of a calorie per calorie basis! Even if the numbers are off by a whopping 90%, that would still make dairy 250 times more ethical than almond milk.

To top it off, most of the pulp to make almond milk is thrown out anyway! Vegans don’t even want to EAT the food that bees give their lives to make, since the pulp is indigestible and has no nutritional value anyway… because Humans are Not Herbivores that can convert cellulose into usable calories. 29

But EVERY part of the cow is used, from it’s hide for leather, to it’s hooves for gelatin, to bones for bone broth or pet treats, to it’s blood for sausage, to leftover bits on the abattoir floor sent to pet food companies. Not a single bit of the cow is wasted, while vegans waste the bulk of almonds that are made into almond milk.

Vegans need to admit that simply because an animal is not on their plate does not make it ‘cruelty free’, like many so called vegans claim. There’s plenty of cruelty in every food we eat. Those who eat animals are just more aware of the cruelty and animal deaths that go into their food choices.

Are almonds vegan? While the vegan fallback is always that they know that no diet is ‘perfect’, they claim to be morally superior because they don’t enslave, impregnate, or murder animals for their nutrition. But that is blind at best, and lying at worst. We get 2500 times more calories for every dairy cow death than every bee death when comparing dairy to almond milk.

There’s no moral superiority for vegans in this math problem. The Carnivore Diet is More Vegan than a Vegan Diet. #carnivoreisvegan

Previous Post Vegans Admit They Can’t Get Enough Protein Next Post Is the Carnivore Diet Expensive? (You Need This!)