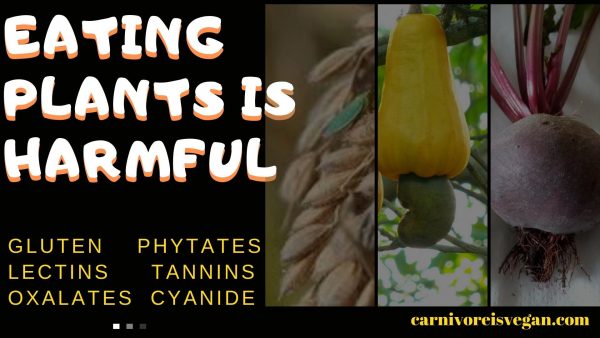 Eating plants is harmful. While everyone says that plants are absolutely the healthiest thing to eat, the undisputed fact is that plants are actually harmful. There is not a scientist in the world who disagrees with this, and by the end of the article, you will understand why.

Lets start with a story. A solitary man living off the land in the Alaskan wilderness slowly starved to death after 113 days, even though he still had food and a book on which plants are edible. This was the sad true-to-life story of Christopher McCandless as told by Jon Krakauer in the book Into the Wild. Eating plants is harmful, but not just poisonous plants. All plants are harmful, it’s just the dose and the health of the animal eating them that makes the poison.

OK, this is an obvious extreme example that eating plants is harmful, and eating toxic plants isn’t the same as eating plants in the grocery store… or is it? Surprisingly, most of the plants that are ‘good for you’ have the same toxins as plants that will kill you. It’s simply the dose that is different. Rhubarb leaves, for instance, are deadly toxic because it has a high amount of a plant pesticide called oxalic acid.

But kale and spinach have the exact same toxin, only in smaller amounts. In fact, almost all plants have oxalic acid in varying amounts as a defense mechanism to keep insects and other pests from eating them. Oxalates are not benign either, oxalate containing everyday foods, like spinach and tea, have actually caused previously healthy people to go into kidney failure from an overdose of these toxic pesticides 1 2

If you don’t get kidney failure from oxalates, it can build up in tissues and lead to conditions such as kidney stones or gallbladder stones, 3 and has even been linked to breast cancer 4 and autism. 5 These oxalates are not benign, and can even cross the blood brain barrier.

Plants are Toxic. This is a Fact.

It has only been our human ingenuity figuring out how to process plants that have allowed us to mitigate their toxins sufficiently to eat them. Just a few examples are:

I could keep the list going forever because so many plants must be cooked or specially prepared to be eaten. Many plants even contain substances that block nutrients from being absorbed. These are called ‘antinutrients’ and some examples are:

Since none of these foods can be eaten without special preparation that would have required critical thinking and passed on knowledge to prepare, they could not have been part of our evolutionary heritage.

In other words, unlike the great apes, early humans couldn’t have just pulled the raw plants off of trees and bushes and eaten them… because plants are toxic. This quite destroys the idea that humans evolved on starches instead of meat, as many vegans claim.

Remember, most plants in nature are too toxic to be eaten no matter how they are prepared. But a few plants have a low enough toxicity that we can eat them. Which brings us to our next point, the fact that these plants are toxic is actually what makes them supposedly ‘good for us’! It’s the small, measured amount of harm to humans that actually causes them to be beneficial to us. While that may sound contradictory, it’s the same reason that exercise is good for us; it hurts us just enough that our body responds to it in a way that makes us stronger.

Stress Can Be Positive

This phenomenon of having a small, measured amount of something bad for you in order to benefit you is known as ‘hormesis’ or ‘eustress’. We think of stress as being ‘bad’, but not all stress is equal, and small amounts of stress can also be thought of as ‘positive stress’, or ‘hormetic’.

Hormesis is good and natural and we wouldn’t be alive without it. Since our bones and muscles stay strong only because we put stress on them, astronauts can’t go to space for too long because they risk becoming too weak and getting osteoporosis without the stress of earth’s gravity to fight against and stay strong.

And that brings us to plant toxins. Aside from micro and macro nutrients present in plants, some of which, like Vitamin C and selenium, also act as anti-oxidants. These substances you’ve been told are ‘good for you’ are actually plant toxins that are harming you! You might have heard of some of these antioxidants like:

Despite the fact they are often characterized as ‘phytonutrients’, they are not in any way nutrients, nor are they essential to human health. In fact, they are harmful and many of them can even be categorized as ‘pesticides’ since many are designed to ward off insects and other pests that might eat them. While people might tell you to eat organic because pesticides are toxic, it’s estimated that 99% of all pesticides humans are exposed to in their lifetime are produced by the plants themselves! 7

The Hormetic Role of Dietary Antioxidants in Free Radical-Related Diseases

For most people, however, they are just the right amount of harmful so that you will fight off the harm and upregulate the body to produce your own antioxidants, such as glutathione, because plants cannot and do not provide you with antioxidants, the body’s own cells provide the antioxidants. Plant substances can only ‘trigger’ antioxidants to be produced… by damaging the cells! ” To control oxidative stress, cells generate molecules termed antioxidants that convert ROS into benign molecules.” 8

So-called plant ‘antioxidants’ really should be called ‘oxidants’ or ‘plant toxins’, because what they are actually doing is creating cellular damage (oxidation) that causes the body to react and create it’s own antioxidants in order to heal the damage. Now, does that make plants sound as beneficial as the talking heads in the media have made them out to be?

Plants Aren’t the Only Hormetics

But plants are not the only hormetics. Everything that you traditionally think of as ‘stress’ is a hormetic at one level, and a negative stressor at another level. Exercise is probably the best example. Getting too little exercise is damaging; getting a moderate amount of exercise is good because it’s hormetic; but getting too much exercise is called known as overtraining and it’s quite harmful. This is called a ‘dose-response’ curve.

Sunlight is another example of a beneficial hormetic at low doses, while burning your skin at higher doses. Plant antioxidants can be damaging at high doses too, yet no one talks about having too many plant toxins or antioxidants. Why not?

As we all know, stress is cumulative. With all of the other stressors put on us with our modern lifestyle: work stress, traffic, pollution, lack of sunlight, too little sleep, and all of the other demands on us are contributing to stress-related diseases, why are you being told to ADD plant stressors to your already overstressed body every day? Shouldn’t people already overwhelmed with stress, be encouraged to be REMOVING stressors from their life, including stressors in their diet, to improve their health?

Interestingly, more and more people are beginning to find out that doing just that, removing plants from their diet, is leading to improved health instead of worsening health. While this may sound heretical and counterintuitive, even more counterintuitive is that there is absolutely nothing present in plants that is necessary for human health. Nothing. Not ‘antioxidants’ (plant toxins), not fiber, not beta carotene, not carbohydrates. Nothing. There are no unique substances in plants that are essential for human health.

There are people today that have lived their entire adult life on a diet entirely devoid of plants while maintaining health greatly superior to that of the average person in ‘civilized’ society. Many of those having adopted ‘a carnivore diet’ have even reversed so-called ‘incurable’ diseases no other diet or lifestyle interventions were able to reverse.

These improvements in health from removing plants from the diet are likely due to many factors, including the increased nutrient density of animal products and less insulin spiking from the decreased frequency of meals that naturally occurs in those who eat drastically fewer carbohydrates. But it’s certainly a reasonable hypothesis, and one those benefiting from eating a plant-free diet will attest to, that many of the benefits come from eliminating plant toxins.

While McCandless’s sad death is a reminder that plants are toxic, some more than others, it’s also a reminder that he would have certainly survived had he been able to find and kill the animals he was desperately hoping would show up. That’s because, with few exceptions, 9 humans can safely get nutrition from every animal on earth without any special knowledge… so long as we can catch and kill it, while few plants are edible, and they require special knowledge or special processing to eat safely. That single fact should tell you something about what humans are designed to eat. #carnivoreisvegan

Previous Post Why are Vegans Protesting Farms and Not Exterminators? Next Post Ketosis vs Ketoacidosis: Ending the Confusion