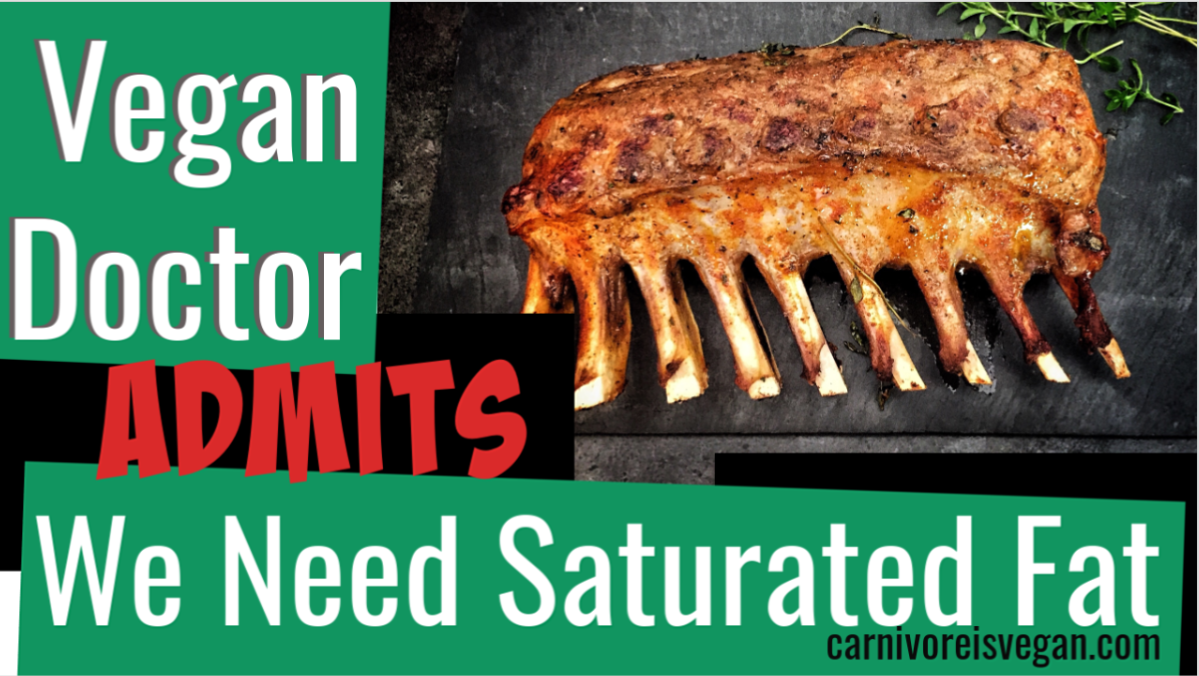 In his article The Diet We Were Designed to Eat, Gregor quotes Katharine Milton, a pHd anthropologist, when he states that he supports a vegan diet because there is a “lack of evidence supporting any notable diet-related changes in human nutrient requirements, metabolism, or digestive physiology compared to our fellow great apes” .

No Change in Nutrient Requirements from the Great Apes?

In our previous article entitled Vegan Doctor Admits Humans are Not Herbivores, we discussed that statement in the context that humans have no evolutionary physiological DIGESTIVE changes from the great apes, but now we’ll discuss it from the perspective of his claim that our nutrient requirements are virtually the same as the great apes.

As you read this, remember that it is Greger’s major premise that humans have a “lack of [evolutionary]… changes in human nutrient requirements…compared to our fellow great apes”.

Unfortunately for Gregor, he should have never made this evolutionary argument because it destroys his entire stated philosophy that humans should eat a vegan diet. This one argument exposes his entire vegan agenda as based on ignorance of both human evolution and physiology. Instead of supporting veganism, the quote and paper he’s quoting supports humans as being evolutionary meat eaters requiring a diet of around 50% saturated fat.

Yes, that’s right, as unbelievable as it sounds, Greger quoted an anthropological paper that supports evolutionary meat eating… as justification for an evolutionary vegan diet! In fact, the paper he quoted was entitled A Hypothesis to explain the role of meat eating in human evolution. But it gets worse for him when he tacitly admits humans need saturated fat.

When Your BFF’s are Bacteria…

But lets discuss how this seeming contradiction, the idea that we are evolutionary meat eaters who need a diet of 50% saturated fats BECAUSE we have the same nutritional needs as our herbivorous great ape brethren, actually isn’t a contradiction at all. It will all make sense in a moment.

Even though animals like cows, sheep, and apes EAT a low fat diet, it does not mean that is where they get their nutrition. You don’t think those animals with digestive tracts so similar to humans can actually digest bark, stems, and grasses do you? They actually can’t. So why do they eat them?

“[I]ngested plant fiber becom[es] nutritious only after its conversion, via microbial action, into essential nutrients, such as short-chain fatty acids (SCFAs)8,9. Microbially synthesized SCFAs, particularly acetate, propionate and butyrate, nourish host organs and can account for 30–57% of a folivore’s daily energy demands ”

Well, ruminants like sheep and cows and (mostly) herbivorous animals like the great apes, have specialized bacteria in abundance in their digestive tracts that just love chomping down on cellulose, the major fibrous component of the leaves, bark, and grasses that make up their diet. These bacteria then poop out saturated fatty acids, which the apes then absorb in their colons as a caloric energy source. Voila, homemade saturated fats.

How Much Saturated Fat Do Animals Make?

But this calorie source isn’t really a significant amount of calories, is it? I’m just making a mountain out of a molehill by trying to make Greger sound more clueless than he is, right? Not at all. The caloric intake from this saturated fat is not only significant, it makes up the MAJORITY of their calories. Read that again: herbivores actually get the majority of their calories from fat! What percentage of the caloric intake of these animals come from the saturated fat from microbes? The amount might shock you:

Note the immense difference in the percentage of fat produced by apes vs humans. Humans simply are not able to produce much saturated fat from our digestive tract, and this seems to be the main oversight in the entire vegan movement. Vegans seem to believe that we should EAT like the great apes, but are ignorant of where and how those apes derive their calories!

But why aren’t we able to perform that microbial magic any longer, but gorillas still can? The logical reason is that we were eating sufficiently large amounts of saturated fats in the diet for so long that we were able to meet our energy needs from the ‘fat of the land’ and, as such, the symbiotic relationship was no longer necessary.

Clearly, there are significantly different physiologic processes occurring when humans derive less than 10% of our calories from gut fermentation while apes derive over 50% from theirs. Yet Greger doesn’t mention this physiologic difference. It seems impossible that he is unaware of this critical physiologic difference between herbivores and humans, yet, he’s ignoring it, as he and the entire vegan movement must to maintain their agenda.

This is called ‘cherry picking’ (or lying by omission) and this tendency of his been noted before, such as in this excellent Critical Review of Dr. Greger’s How Not to Die book where it points out the many many many times he ‘massages’ or ignores the data in order to favor his desired conclusion of veganism.

Many vegans will read this and say, “So what, if we need saturated fat, there are vegan sources of it”. But this would miss the entire point their guru is making that we should be eating a diet based on what we evolved to eat. First of all, there are no vegans today recommending a diet of 50% or more of the diet be composed of fats, let alone saturated fats, not even Greger, despite the fact that is what he is unknowingly arguing.

Read that again: Humans not only lost the ability to make saturated fats during a time where we had no vegan sources of saturated fat, but we also Lost the Ability to Absorb B12 In Our Colons at the same time. This proves there was a plentiful exogenous source of both saturated fat and Vitamin B12 in our diets. Greger is arguing the best diet is one based on evolutionary principles, but chooses to ignore that evolution chose meat over plants.

When your career is based on a failed ideology, you must either accept the actual science and admit your mistake, or pile lie on top of lie in hopes of fooling enough people to keep your career going until you retire. It seems Dr. Greger has chosen the latter course of action. And remember that it’s his argument that we have the same nutritional needs as the great apes. And those apes get more than 50% of their calories from saturated fats.