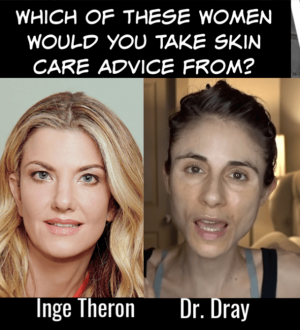 Yes, Virginia, collagen is an animal product. I find it incredibly interesting when vegans are so clueless as to not even know what constitute animal products. I see people all the time claim to be a vegan or vegetarian while stating that they eat fish (sorry vegans, fish is definitely an animal). It’s like veganism is just so trendy that people don’t even care what the word means, they just want to be part of the trend. Doctors, in particular, should actually know what the products they recommend are, but the vegan Dr. Dray does not seem to be aware that collagen is definitely an animal product.

Dr. Dray is a vegan dermatologist YouTuber. While I admire her spirit of being on YouTube and putting her skin care and her vegan diet out on parade for the world to see, I don’t understand how anyone can see her as a role model for either veganism or skin care since, IMHO, she looks absolutely terrible.

Here she is with 10 years of aging in less than 3 years of being a vegan. Neither of these are touched up by me. I simply took screenshots from her videos using the same screenshot tool. The difference is startling. Would you take dermatological or dietary advice from someone who’s skin has aged that poorly in such a short amount of time?

Vegan Face is a Thing

‘Vegan Deterioration’ is a YouTube channel reviews the deterioration of vegans because she began deteriorating on veganism and ended up giving it up and going back to eating animal products upon discovering the only thing that finally worked to improve her skin was a product she didn’t realize contained horse fat!

In This Video she notes that Inge Theron, founder of a company called ‘Face Gym’ has found a niche charging vegans between $1000-$4000 treating what she calls “Vegan Face”! That doesn’t bode well for vegans about what their insides look like when their outsides are deteriorating so badly.

“[V]egan Face is a name for a slack, wasted look that is caused by an absence of protein in your diet. The skin is dry, sallow and flaky. ”

But that’s not what we’re here to talk about, we’re here to point out that as a dermatologist, Dr. Dray doesn’t even know that collagen is an animal product… while reviewing and drinking products with collagen in them.

In her video The Ordinary SKIN CARE: Worth it?? My Final Thoughts she reviews ‘The Fountain’ skin care supplement and notes that it contains collagen, but doesn’t mention what collagen actually is despite seeming to be well-educated on all of the other ingredients she comments on. She is seen drinking the product on camera, seemingly oblivious to the fact that it’s an animal product. She certainly doesn’t mention it.

Not only is collagen an animal product, but It states this right on their website it’s made from fish. Not only that, but the marine collagen in this product is made from the skin, scales, fish, fins, and bones is cooked down until it’s a thick gelatin. The sugary fruit-flavored jello your mom gave you when you were a little kid is made from bovine collagen, usually made from the hooves or hides of cattle.

Many vegans seem unaware that collagen and gelatin are made from animals. Or perhaps eating jello and taking collagen is one way for them to get animal products free from guilt, like when 1/3 of Vegetarians Eat Meat When They are Drunk, and absolves them of admitting they need animal products to thrive.

But back to Dr. Dray. She not only stated explicitly that the product contains collagen, but she drank it on camera after discussing the product extensively. So the fact that she didn’t mention it’s an animal product when she’s a vegan and, presumably, she has a high number of vegan followers makes me believe she’s unaware of what collagen even is.

But that’s OK. I hope she doesn’t read this and stop taking collagen, because it looks like she’s in ‘End Stage Veganism’ and her ‘Vegan Face’ shows she can really really use some animal products, collagen in particular. I hope she doesn’t have to get much worse before she realizes what everyone else can see; the vegan diet is obviously not working for her.

Previous Post Vegan Debate Tactics: Always Move the Goalposts Next Post Vegan B12 Deficiency Proves We Are Not Herbivores