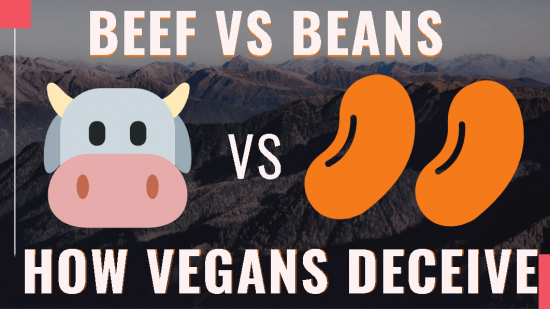 The infographic below, of a comparison between beef vs beans is a great example of how vegans are so desperate to deceive in order to get people to join their cult, they are willing to make completely ‘apples vs oranges’ comparisons that make no sense. In this case, instead of making the more fair comparison of dried beans to dried meat (aka beef jerky or biltong), or cooked beans to meat, they make the comparison of DRIED beans to fresh meat!

If veganism is really such a great way of eating, why do they need to use such deceptive tactics to get people to join them?

Fresh Beans Can Kill You

All right, so lets make a more fair comparison between beef vs beans and compare 100 grams of cooked beans to 100 grams of fresh meat. We could compare fresh beans to fresh meat, but since many fresh uncooked beans will either make you very sick or kill you, 1 that wouldn’t be a very fair comparison. But that does make you realize that beans could not have been a food humans ate in our evolutionary past until the control of fire.

While the vegan meme made the two look quite equivalent, when you compare them both hydrated, it quickly shows the numbers for beans are inflated by about a factor of 3. 2 Did they really think no one would notice this?

Beef vs Beans, a Direct Comparison

In the first column of the table below for each of the beef vs beans, we use a website that compiles the data gathered from the US FDA For Beef and For Beans to show the measured values. It’s already looking not as good for beans considering the 1/3 drop in nutrient and protein values from the dehydrated beans, but those are simply measured values in the lab, not what gets absorbed by humans.

And since vegans picked and chose only the nutrients that favored beans over meat, we added the ones they left out that favor meat, like zinc, selenium, Vitamin B6, and Vitamin B12.

Beef vs beans. Did you REALLY believe that beans have as much protein, gram for gram, as meat? Vegans KNOW that getting high quality protein is one of the main reasons Vegans Are Fleeing Veganism in Droves due to poor health, so they are willing to exaggerate and even lie to pretend that vegan foods have as much protein as meats so they can draw a few more gullible souls into their cult. It’s the same reason why nearly every vegan athlete Admits They Don’t Get Enough Protein and is forced to take protein powder to meet their needs.

“Protein Digestibility Corrected Amino Acid Score is a method of evaluating the protein quality, with a maximum possible score of 1.0. Animal meats like beef have a score of approximately 0.9, compared with values of 0.5–0.7 for most plant foods”

So look at the numbers above. In just the measured protein, beef has over 3 times the protein, but unfortunately for vegans, protein from beans isn’t absorbed completely. How much is absorbed? This has been studied extensively and between digestibility and absorption, numbers range from 47-85%. 3 4 5

I’ve been generous in giving the beans the greatest absorption, even though that might be as much as double the actual absorption of the individual beans. Assuming even the highest absorption rate gives meat between 4-5 times the protein of beans. Hardly the equivalent the vegans claim which is why all the vegan athletes take protein powder, which is an Admission that Vegans Don’t Get Enough Protein.

Lets talk about iron next. In the vegan meme at the top, it shows the amount of iron from beans not only equivalent, but SUPERIOR to meat! This is even a greater deception than that of protein since nearly every scientist recognizes that the vegan diet is very low in iron and that most vegans are iron deficient, even if they are not outright anemic.

Heme iron (think hemoglobin) is the kind of iron that is present in meat, and now Leghemoglobin is in Impossible Burgers, while on the contrary non-heme iron is present in plants. The two molecules are extremely different. Non-heme iron (plant based iron) is:

Heme iron, on the other hand, is well-absorbed and absorption is not inhibited by plant toxins nor dependant upon the addition of other nutrients, such as Vitamin C. 7 It’s almost as if… humans were designed to get their iron from animal sources and not plant sources.

We won’t go over the low absorption of each nutrient individually, but the inhibitory effects of components of plant toxins are the subject of thousands upon thousands of food science studies, and part of the topic of our page Eating Plants is Harmful.

Zinc, calcium, and iron are the major nutrients that get inhibited by plant components. 8 9 You will constantly see memes saying that such and such a plant (like spinach or dandelion) has more calcium than milk. When you take into account the amount of calcium bound by anti-nutrients in plants that make them unavailable for human absorption, their lies quickly become apparent. 10

Note the original meme didn’t include zinc at all! It wouldn’t be because meat has over 15 times more zinc than beans after accounting for decreased absorption, 11 would it? In fact, zinc is very low in the vegan diet and it’s required for testosterone production, hence the lowered sperm count in vegan men. 12

Just think about that for a minute. A diet that is the most evolutionary appropriate for humans would support sperm health of men almost above anything else! Our species wouldn’t have been able to perpetuate itself, let alone become the apex predators we are, on a diet that doesn’t support the basics of procreation.

Since this meme puts the price in pounds, the creator must live in the UK, and perhaps prices are different there, but here in the US, this is a local price of ground beef from a deals website called MyGroceryDeals, which I use to do my own shopping.

That puts the price of beef at approximately £ 0.45 per 100 grams. Ground beef and steak are both 100% beef, so why did the meme have to use more expensive cuts of steak instead of less expensive ground beef (also called mince in the UK? The only reason I can think of is to deceive you into thinking it’s far far more expensive than beans when, if you compare the cost per either calorie or cost per amount of protein, meat will come out the equivalent or even better.

Last but not least is the water usage lie in the meme. They are so desperate to win people over to the vegan cult that they have to repeat lies that have been rebutted quite decisively. Their meme shows that it takes approximately 14 times more water for the same amount of (dried) beans, but the reality is more like only 8.5 times more water to produce meat. 13 14 But remember, that just includes the growing of the beans.

Nearly all beans are sold either dried or cooked and canned, which will also use water and energy. In addition, the vast majority of beef is sold locally, while most beans are shipped from the growers, most of which are not local to you and many are from overseas, to a production plant, to a distribution center, then to your grocery store. This all requires water and energy to accomplish. So the comparison of beef vs beans is not as black and white as vegans make it out to be.

Additionally, the water cycle is such that water doesn’t get ‘lost’ when it gets grown into beef or plants. Vegans need to go back to school and study the water cycle. I guarantee that not a single drop of water has been lost from the planet due to anyone’s food. Neither beef vs beans are ‘stealing’ water from the world.

In fact, the beef industry, as opposed to crops, is uniquely capable of regreening desertified areas of the world including bringing rivers back to life, 15 being not only carbon neutral, but carbon negative, 16 and even bringing back wildlife to the extent that conservation ranches are getting Certified by the Audubon Society, all while feeding people nutrient dense high quality protein and calories even in poor areas.

Vegans MUST put out these kinds of deceptive beef vs beans memes to desperately hope people won’t look into the details and will join their cult despite all the evidence veganism is not only not an evolutionarily appropriate diet for humans, but it’s neither environmentally friendly, nor is it even the diet that kills the least animals, as we point out on our page The Carnivore Diet is More Vegan than a Vegan Diet.